I attend a weekly ladies' study group.  We're working through a book by Mindy Ferguson, called "Eyewitness to Majesty: Abandoning Self for Christ."  It's an in-depth study of the Apostle Peter as an eyewitness to the life of Christ. 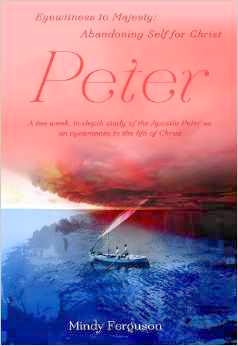 It's been an interesting study.  The best part about any group study is the interaction with the other women in the group.  As we share our insights, we understand more about our sisters' journeys through this dark world, on our way to glory.

Last night, I shared my answer to a question, and I could tell by the response that I was not explaining my position clearly.  Hence this post.

On pages 130 - 131, Mindy Ferguson is leading the reader to think about the women who were at the foot of the cross.

The women stood on the hill watching as Jesus was crucified.  Crucifixion was a slow and agonizing death by asphyxiation.


Mindy goes on to describe the suffering of our Lord, and quotes 2 Corinthians 5:21, explaining that Jesus became sin for us.

I can't imagine how the women felt as they stood watching Him.  They saw the soldiers mock Him and spit on Him.  They watched Him breathe His last breath.  Yet these women stood beside Him.  They were Jesus' disciples.  They followed Him, believed in Him, and took care of Him.  They supported His ministry - even at the cross.


Then she asks this crucial question:

How do the actions of this loyal group of women challenge you to a deeper commitment to Jesus Christ?

Let's think about this group of women for a minute.  There is no doubt that they loved Jesus.  They had followed Him for years, providing for Him and His disciples out of their means.  They had watched Him heal the sick and raise the dead.  They had heard Him preach the gospel and thunder the truth at the Pharisees.  These women believed He was the Messiah, and they loved Him very much.

But they didn't understand.

They stood there at the cross, weeping, mourning the fact that their Messiah was hanging there, suffering, bleeding, and dying.  They were brokenhearted.

...for as yet they did not understand the Scripture, that he must rise from the dead. ~John 20:9 ESV

On Sunday morning, the women went to anoint Jesus' body.  They were told by an angel, "He has risen.  He is not here. See the place where they laid Him.  But go, tell his disciples and Peter that he is going before you to Galilee.  There you will see Him, just as He told you."  And they went out and fled from the tomb, for trembling and astonishment had seized them, and they said nothing to anyone, for they were afraid. ~Mark 16:6b - 8.

The man dressed in white told them that Jesus had risen.  He told them that He would be going ahead of them to Galilee, which is just what Jesus told his disciples a few days before His crucifixion.  (Mark 14:28)
The angel also told them to go and tell the disciples this good news.

But what did they do?  Look at Mary's words in the book of John:

Now on the first day of the week Mary Magdalene came to the tomb early, while it was still dark, and saw that the stone had been taken away from the tomb. So she ran and went to Simon Peter and the other disciple, the one whom Jesus loved, and said to them, “They have taken the Lord out of the tomb, and we do not know where they have laid him.” ~John 20:1-2 ESV

She could have run to the disciples and said, "He is risen!  The Lord Jesus is alive!  He said He'd meet us in Galilee!"

She just didn't get it.  She did not understand.

When I think about the trauma those women went through, my heart breaks for them.  I am a mother, and I try to imagine, simply on a human level, what it would have been like to be the mother of the Son of God.  Mary knew that Jesus was the Son of God, but to watch Him mocked and beaten and scourged and crucified must have brought her unimaginable pain.

So, it's understandable that Mary Magdalene didn't rush to tell the disciples the good news.  It hadn't sunk in yet.  It wasn't good news yet.  She didn't comprehend that Jesus was alive.  She only thought they'd moved His body.  It wasn't until He spoke her name, "Mary," that she began to understand.

John 20:16 Jesus said to her, “Mary.” Hearing only her name, Mary recognizes the voice of Jesus. As Jesus had taught prior to his crucifixion, “He calls his own sheep by name. … and the sheep follow him, for they know his voice” (10:3–4).~ESV Study Bible notes.


The Difference Between the Women at the Cross and Christians Today

The women at the foot of the cross were devastated.  They were in shock.  They mourned and wept, and could not comprehend the plan and purpose of God.  They watched Jesus die.  They thought He was dead.  On the first day of the week, they were heading to the tomb in order to treat His dead body with the respect that all of the dead were afforded.  It was their normal cultural practice.  In their eyes, He was dead.

He Was NOT Dead

But Jesus was very much alive!  That very evening, the evening of that day, Jesus did an amazing thing:

On the evening of that day, the first day of the week, the doors being locked where the disciples were for fear of the Jews, Jesus came and stood among them and said to them, “Peace be with you.” When he had said this, he showed them his hands and his side. Then the disciples were glad when they saw the Lord. Jesus said to them again, “Peace be with you. As the Father has sent me, even so I am sending you.” And when he had said this, he breathed on them and said to them, “Receive the Holy Spirit.~John 20:19-22 ESV

He appeared to His Disciples!  He stood among them!  He showed them His hands and His side!  And He spoke words of peace to them.

What grace!  These men and women had gone through four days of trauma, and Jesus spoke Peace to them.

The next thing He did is the point of this blog post:


He breathed on them and said to them,

The resurrection changed everything.

Let me repeat that:

The Resurrection Changes Everything.

See Part 2 to find out why I think it was the wrong question.

Email ThisBlogThis!Share to TwitterShare to FacebookShare to Pinterest
Labels: Resurrection

Remember that you will give an account for every word. Respond with wisdom and grace, please.

What is the Good News?

In this age of instant communication, we often hear about bad news. Wars and rumours of wars, death, kidnappings, disease, heartache, natural disasters - we hear a lot of bad news. But there IS good news. Paul McDonald tells the Good News on his blog.
Click here to read about it.

Are You a Fool?

Theological Word of the Day

The Sovereignty of God in Suffering by my son, Daniel